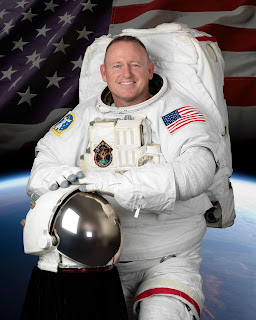 Undisclosed Middle East -    This week, decorated combat fighter pilot, United States Navy Astronaut Captain Barry ‘Butch’ Wilmore, will be reunited with fellow service members deployed to the middle east.  He’ll also be strengthening the bond between DoD and NASA by once again drawing attention to the long standing relationship the two agencies have had since 1959.

Selected as a NASA astronaut in July, 2000, he has served as pilot, flight engineer and commander on space shuttle and space station crews.  In March, 2015 he returned to Earth after spending nearly six months about the International Space Station.

Now he heads out on his second DoD Armed Forces Entertainment Tour.

With years of training in preparation for months of operational deployment whether as a Navy pilot or NASA astronaut, Captain Wilmore’s life story is relate-able to every service member he meets - and he loves spending time sharing it.

“I look forward to once again thanking my fellow service men and women for their sacrifices,” said Wilmore. “I’m grateful for the opportunity to share the unique experience of space flight with fellow service members.”

“It’s amazing to witness the bond that forms between troops and astronauts, once both realize how similar their careers are in dedication to duty, sacrifice and commitment to mission excellence.” said Robi Powers, founder of American300, who has hosted hundreds of DoD Resiliency Tours. “Since Bob Hope, Troops have grown to expect the occasional entertainer visit, but there’s something surreal about seeing a NASA blue flight suit walking across a military base knowing that one of our ‘spacewalkers’ has taken time out to be with troops serving far away from home.”